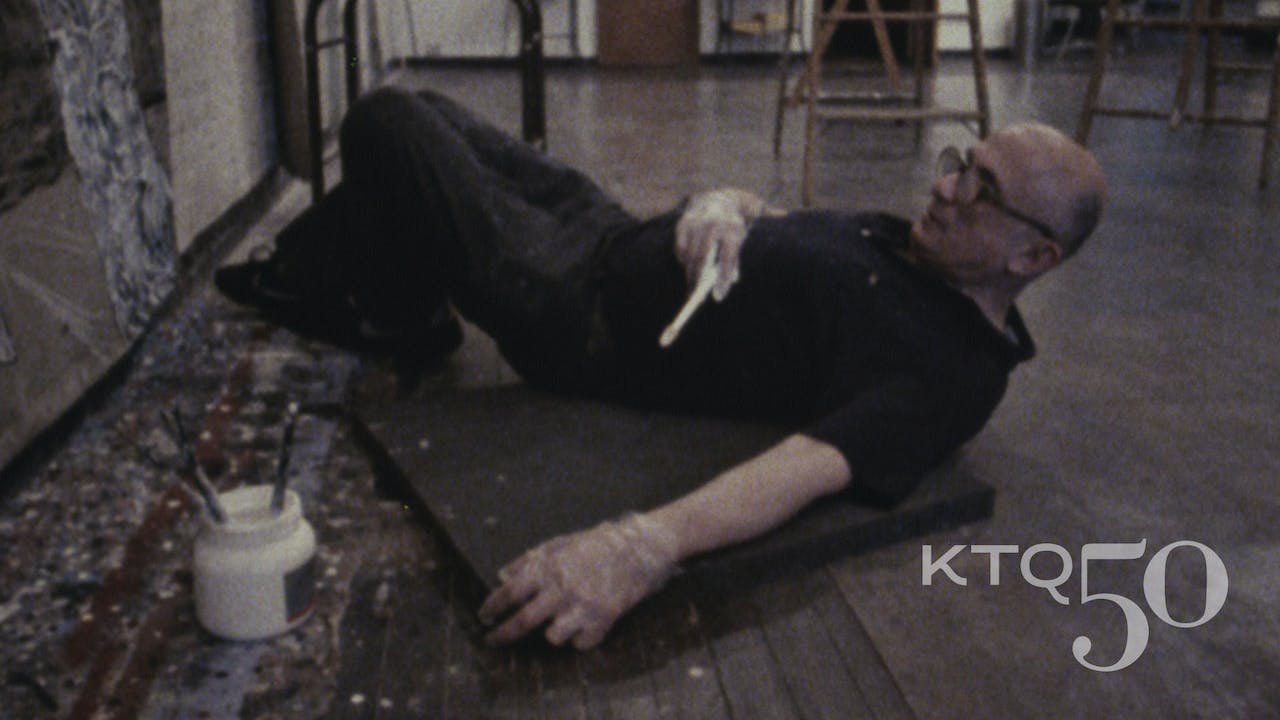 Golub: Late Works Are the Catastrophes

Leon Golub's massive canvasses depict scenes most of us would prefer not to see – mercenary killings, torture, and death squads. Golub offers not simply a profile of a painter with a political conscience, but an investigation into the power of the artist to reflect our times and to change the way we think about our world.

This one-hour film juxtaposes scenes of violence and political repression around the world, statements by American politicians and others, the responses of viewers to Golub's exhibitions and an extended sequence capturing the artist at work. In his New York studio, he creates a huge canvas that depicts a brutal assassination – a reminder, he says, of U.S. subsidized activity in El Salvador.

While tracking a major retrospective of Golub's work across the United States and Canada, the documentary also follows the creation of his monumental canvases, detailing his complex and unorthodox techniques. It then accompanies the finished painting, White Squad X, to its European opening in Derry, Northern Ireland in a joint exhibition with Nancy Spero, Golub's wife.

Interviews and discussions filmed in Derry raise questions about First Amendment rights and the venues available for art to speak to these issues. When a women in the audience talks about a lack of safety for Irish artists who "reflect reality" Nancy Spero says, "...it's different in the United States. I don't think that they're afraid of what an artist has to say." And Golub responds, "Society does not censor you until it really thinks you're dangerous, and we have not been considered sufficiently dangerous."

Kartemquin Films completes its chronicle of the work and times of the American artist, Leon Golub. Begun in 1985, the film ends with Golub's death in 2004, taking us from searing images of interrogations and torture to the ironies and dark humor of old-age.

Jonathan Rosenbaum described an earlier, shorter version of the film as "virtually perfect, conveying the exhilarating sense that art is inseparable from the world that engenders it and the world that receives it." Over-sized canvasses with screaming mercenaries and rioters urninating on a corpse; photographic fragments used as information and inspiration; the making of one of Golub's death-squad series from start to finish and to its exhibition in Derry, Northern Ireland; news footage from around the world; museum-goers' responses; disturbing music: out of these disparate elements the film creates a dialogue between image and audience that reflects what Golub calls the "disjunctiveness" of modern life. We are horrified, detached, and at the same time strangely complicit. In the aftermath of September 11, and now with the photos from Abu Ghraib prison scandal, Golub's ferocious, monumental work of the 70's and 80's (used to this day by human rights groups such as Amnesty International) remain prophetic and essential, even as they give way to the snarling dogs, erotica, and wise-cracking meditations on mortality which began to appear in his paintings in the 1990's.

When we revisit Golub in 2001, the aging artist tells us "my work these days is sort of political, sort of metaphysical, and sort of smart-ass. I'm playful and hostile. Let's see if you can keep up with my slipping around." So we make our way through half empty canvasses dotted with birds of prey, smoking skulls, neon chorus girls, pierced hearts, and snickering text: "Bite your tongue. Save your ass."

The film captures an historic artistic journey, shared with his wife and studio partner of 50 years, the prominent anti-war and feminist artist, Nancy Spero. In some wonderfully comic and touching scenes we see them as each other's most valued critic and most ardent supporter. Golub continued in his later paintings to "report" on what's going on in the world, but he does it with the kind of dissonances and discontinuities that led Theodor Adorno in his essay on Beethoven to proclaim, "In the history of art, late works are the catastrophes."